The Winnipegosis Museum (former CN station) and the Medd House Museum are open 7 days a week. 10:00am -4:30pm.
Jessica, Jenna, or Adam will be happy to take you on a tour!!
This year we are celebrating the influence of sports on our community. Come in and see if your favourite team is being remembered!!
Follow us on Facebook- Winnipegosis Museums. 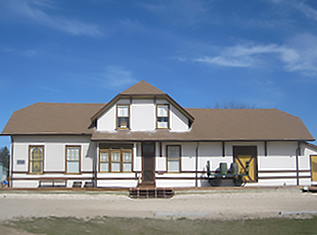 The Canadian National Railway Station, designed by Charles Bohi, sits in the heart of Winnipegosis business district. The station has been an intrinsic and visible presence since the station with waiting room, station master’s office, freight storage and living quarters was built in 1897. In the early 1970’s the station was closed and the tracks were removed in the 80’s marking an end to eras of commerce and travel to and from distant places by rail. The Village of Winnipegosis subsequently purchased the building with the intent of establishing a museum.
In 1978 a museum committee was formed and began collecting artifacts which reflected the history of Winnipegosis and surrounding areas. From the onset this has been accomplished through the dedication of volunteers and residents who generously donated artifacts and family treasures. Along with these artifacts comes an intriguing and fascinating history of the struggles and lives of the folks who called Winnipegosis their home over the centuries. The museum collection reflects the original peoples including Cree, Saulteux and Metis, and all the immigrant peoples that have called Winnipegosis and surrounding area their home including Icelandic, Ukrainian, British, and Mennonite. The collection covers Pre-Columbian artifacts, through early fur trade, salt manufacturing, fishing, marine artifacts, agriculture, lumber industry, ice-making, prairie family life, schools, railway artifacts, hospitals, stores, movie theatre, hotels and the military. The collection spans many years and offers an intriguing portrait of life and times in the Village and surrounding area.

The Medd House is one of the last few grand wooden homes in Winnipegosis built at the inception of our village still standing in good repair. Built in 1900 for George Bellamy, it was purchased by Dr. Medd in 1914 when he married Agnes McArthur. This home served as residence for the Medd family and as the Doctor’s office and the first "hospital” as operations were performed on his dining room table and /or kitchen table until 1927.
The wooden building itself has much to offer as a lesson in history as few changes have been made in the last 100 years with the exception of the conversion of one room into a bathroom with running water and electricity added as soon as it was available. The doctor’s office was added to the west side in 1927 which added more space upstairs. Dr. Medd by his own calculations delivered over 1300 babies in this area before his death in 1946!
The house has been primarily owned by the doctor and his family. His widow lived there until the 1970’s and then the family kept it as a summer residence. In 2011 the family donated this house to the village for the use of the museum with a number of the original furnishings and personal artifacts.
On the main floor the Medd house has a kitchen, pantry, dining room, parlour, foyer, closed in veranda, and the doctor’s office. The second floor has four bedrooms, bathroom, closets and a large landing or sunroom. There is a cellar and a small unattached garage. The garden area still has raspberry bushes, pin cherry bushes, gooseberry bushes and an apple tree as well as rhubarb plants and some herbs. There is a well sized lawn that has been kept trimmed and there are beautiful old shade trees on the lawn area. A cement sidewalk leads from the road to the veranda and kitchen door.
The displays downstairs reflect the lifestyle of Dr. Medd and his family in the c1930’s. The family has left much of the original furnishings for these rooms. The doctor’s office has been set up as authentically as possible to reflect the history and work of Dr. Medd.
The second floor master bedroom reflects the Medd’s life style c 1930’s and contained furniture, clothing and personal artifacts.  The bedrooms have displays that display the history of our area. One room is a tribute to Edna Medd. One bedroom is dedicated as a nursery and contains many of the Medd children’s toys and clothes. Another room highlights artifacts of the Villages hospitals. One area on the landing has been set up as a tribute to Agnes Medd.

Would you like to receive periodical updates via email about the Municipality of Mossey River including local news and upcoming events?